88 000 refugees with exceptional leave to remain (“tolerated”) and additionally an estimated number of 100.000 people without papers live in Germany, exposed to the constant fear of deportation. In 2006 The Conference of Interior Ministers (IMK) decided on a right to stay, but the situation of these people has not improved significantly since. It has become obvious that the IMK does not aim for a permanent solution to ensure a right to stay.
However the deportation is imminent.
More than half of those tolerated have lived for more than six years in Germany.
However the deportation is imminent.
For example mass deportations of Roma are currently discussed to be carried out to Kosovo even though these people have already lived up to 20 years in Germany. In Kosovo, they face exclusion and a life in extreme depravation.

In the face of these injustices we fight for a society where all people enjoy the equal rights irrespective of their background or ethnicity. Furthermore we envisage a society that confronts racial discrimination and exclusion wherever they occur.

Therefore “Youth without borders” with an alliance of various Antira Groups and other supporters calls for a demonstration for an unconditional right to stay:

I ♥ ♥ ♥ an unconditional right to stay for all!
I ♥ the abolition of exclusionary laws and regulations, such as Residence requirement, Asylbewerberleistungsgesetz and storage accommodation
I ♥ the legalization of undocumented migrants (the so-called illegals)
I ♥ equall opportunities, especially in education and labour
I ♥ the abolition of detention!
I ♥ the right for our deported friends to return to their home in Germany.

“Youth without Borders” is a nationwide initiative set up by / for young refugees and migrants. Since 2005 we have been fighting for equality, an unconditional right to stay and against deportation. As always the Konferenz of the Ministers of the Interior (IMK) will take place simultaneously to our annual conference.
For more information visit www.jogspace.net 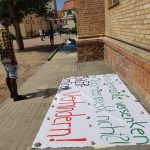